Lau runs a company that provides invaluable resources to the artistic community, ranging from coaching, acting/voice classes, and workshops. I have worked with her on a one-on-one basis, and found her insightful and creative in... »
Gretje Ferguson, Portrait and Headshot Photographer 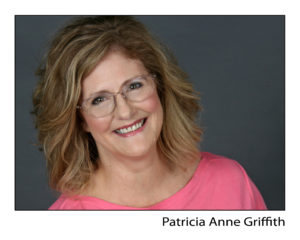 Patricia Anne Griffith began acting and modeling professionally as a child. After majoring in Drama at the University of Georgia, she went into acting in regional theaters including Actors Theater of Louisville and Syracuse Stage. She then spent time on the road with The Southeastern Shakespeare Company, and several dinner theaters. In New York, she made several commercials, appeared in daytime TV’s “One Live to Live” and “The Guiding Light”. She also appeared frequently off-Broadway in shows such as “You Never Can Tell,” and as the lead in “Rhapsody Antigone.” She’s appeared in films such as “The Money Pit,” and “The Flamingo Kid,” and more recently, “Infinitely Polar Bear,” starring Mark Ruffalo, and “American Hustle”.  She appeared in the Boston Playwright’s Festival 2013 in the two-character play, “Curtain”. She attended the American Academy of Dramatic Arts in New York before becoming a Drama major at the University of Georgia.