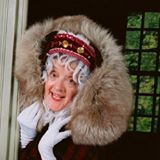 She is currently the Artistic Director and founder of Light & Song, Inc. and Laduvane, (Lah-DOO-vah-neh) a unique women’s Balkan music ensemble that has performed since the seventies and is still going strong today.

She is proud to perform professionally with The Proper Ladies touring throughout New England during the year presenting traditional and historical Victorian Parlour songs.

Anabel has been performing and working with singers and non-singers since the early seventies. Her “Songs for Non-Singers” course at the Cambridge Center for Adult Education was a favorite for more than 25 years.

Anabel Graetz starring in a commercial with Tom Bosley from the show “Happy Days”!